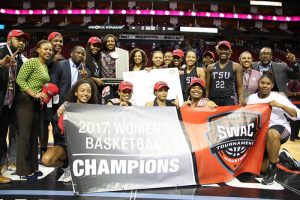 A back-and-forth contest was tight throughout, but Texas Southern (23-9) tried to pull away late. Up 63-59 with 5:17 left, Grambling’s Chantiara Lewis nailed a triple to bring the top-seeded Lady Tigers within one, but women’s basketball tournament MVP Joyce Kennerson responded on Texas Southern’s next turn with a trey of her own.

Shaklya Hill and John’ea Thompson claimed the lead for Grambling when they keyed a 7-0 run that left Texas Southern down 66-63 with 2:29 left. However, Texas Southern responded in kind, scoring the final seven points of the game, a run sparked by consecutive baskets from Chynna Ewing and punctuated by a Kennerson free throw.

TSU started the scoring with a Kennerson three that banked off the glass just before the shot clock expired, but Grambling responded with eight unanswered points, taking a slim lead into the second quarter. After a three-point play from Hill that put Grambling ahead 30-22 with 4:40 left, Texas Southern responded with a 10-0 run that Artavia Ford capped with a short jumper to hand the No. 2 seed Lady Tigers their first lead of the game. Both sides fought to a 35-35 draw at the break.

Kennerson led all players with 29 points, one shy of her career-best. She added three assists. Breasia McElrath chipped in 10 points.

The All-Tournament Team is listed below.